This past week we have done a little “review” over the connection between decimals and percents (and tied in percents a little even though the CCSS don’t mention them in 4th grade…shhhhhhh), and it was a good time to “catch” some of those students who really weren’t super solid on the concept when we did our bigger unit earlier.  To make sure I could really see what student could and could not do, I divided the class into three groups and rotated each one through 3, twenty minute stations:

Here’s what it looked like!  The first rotation simply involved students solving a set of 3 word problems that had fractions and/or decimals in them.  There were conversions, adding fractions with 10 and 100 as denominator, and a “missing factor” problem.  Students were allowed to work alone or in pairs to tackle the challenges.  If they finished early (some did), they could work in their challenge folders or play the Trilogy memory game we had played the day before. 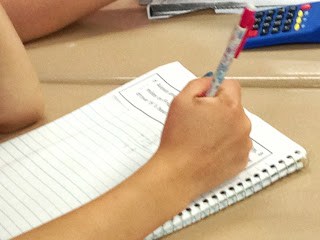 The next station is one that might look familiar if you have been following my blog for long . . . I broke out my decimal sequencing cards and threw in some fraction ones as well.  I gave the students a number of options . . . they could pull two cards and decide which symbol ( < > =) would belong . . . they could grab a stack of cards and put them in order from smallest to largest . . . or they could get creative.  And they did! 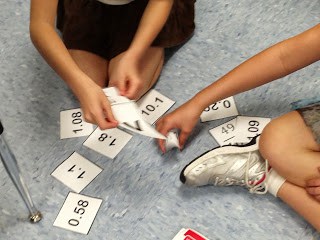 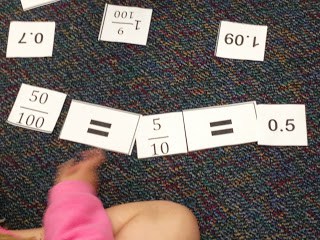 The final station was “Teacher Time” . . . a chance for me to sit with groups in front of the Smartboard and present different problems and really watch how they solve them.   This was a time for me to trouble shoot with a few students and see who might need a little “one on one” work during our I/E time.  I did identify 3 students during their rotation who had some gaps in their understanding and was able to pull them later that day.  I will work with them again Monday and see what stuck! 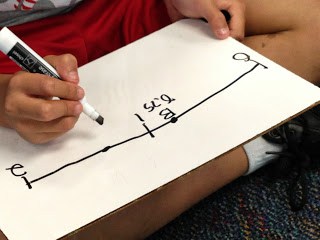 I hope everyone had a good week–and, if you are like me–you are wondering how in the world you are going to get everything done in these last weeks!  Have a wonderful weekend!