Just a quick post today to teach you a game that REALLY helped my students review the concept of “factors” and build their understanding of remainders.  This is SUPER easy to play, can be differentiated easily, and can be set up in a matter of minutes!

Because we have been going with a bit of a cookie theme, I refer to the counters as “cookies”.  If I were a more adorable and cute and fun teacher, I would have made little cut out cookie shapes or something. Nope.  Colored cubes in my room.  I told them to use their imaginations.

Here is the way the game works:

A set of partners gets a set of plates (definitely need plates for cookies), one “die”, and a set of counters.  I used 15 “cookies” per pair but you could easily go up and down from there.  For groups that finished early, I had them grab a “handful” of cookies for their next round.

I sat down with the students around me to model the game.  I tracked the rounds on the Smartboard so they could see how to keep track in their own notebooks.

Player 1:  Roll the die (I used a standard 6 sided die for this round).  That tells you how many plates.  That player then takes the 15 counters, shares them equally among the plates, and KEEPS the leftovers! If there are no leftovers, play goes to the next person. 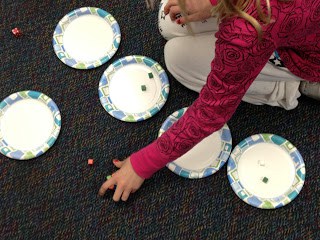 Player 2:  Roll the die to determine the number of plates.  Take the remaining counters, share them equally, KEEP the leftovers!

Here is how we kept track: 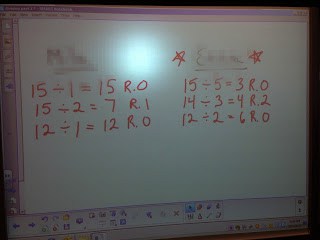 After a few reps, students easily got it and were excitedly chattering about factor and which numbers “worked” the best.  I knew we were ready to roll.
It was such a simple game–but the students loved it!  I sat with a few strugglers and really watched them model.  Students who really “get it” stopped using the plates after a few round and did it mentally.
As the game finished, I had the students put away their 15 “cookies” and grab a random handful . . . most had between 30 and 50 counters to use.  I also took away their standard dice and replaced them with:
I love dice.  If you don’t have cool dice–no worries.  Just take pieces of masking tape or labels and make your standard dice into whatever you want!  Fractions . . . big numbers. . .  operations signs.  I wanted the students to have only single digit divisors, so I stuck with these.  This adaptation was MUCH harder for many of the students, and I needed to do more coaching.  I definitely feel we could play it again!  Remember as you get down to only a few counters left–say 3–and if the player rolls a number larger than 3, the division problem would read 3 divided by 4 = 0 R.3 and that player gets the remaining counters.  This is a great time to review the idea that the 0 stands for “0 groups”.  This was a little tricky for a few of mine at first…

Thanks for stopping by!  Let me know how it goes if you try it with your students!