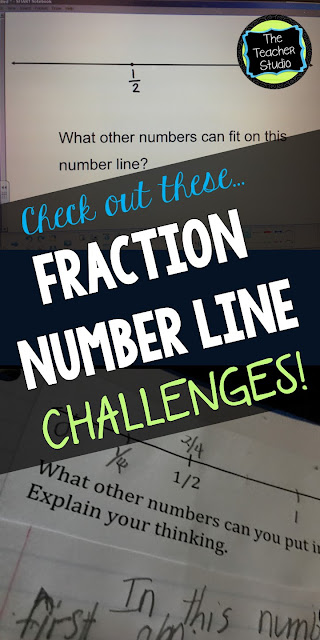 Hello everyone–and thanks for coming back for more fraction adventures! Today’s post is really a combination of classroom “happenings”; I don’t know if you’ve noticed, but sometimes something I plan as a quick warm up turns into something just a teeeeeny bit more involved!

That was the case with my warm up the other day. It seemed simple enough. Note: I purposely did NOT put any points or any other references on the number line. See below . . . 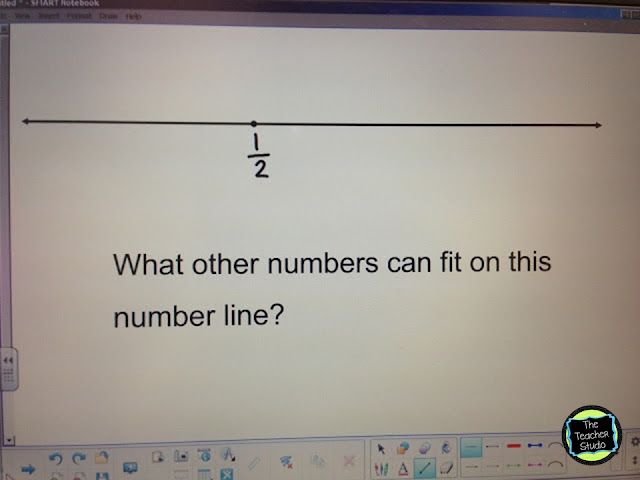 Now, if you’ve been reading days 1-10, you know that I like to torture my students with odd questions and bizarre situations and obtuse tasks. Watching them struggle makes me beam with pride. Seriously! My students will take on a task like this with no questions asked any more! I did get a few comments . . .

“Is this one of those ‘There are lots of right answers’ types of problems?”

“Can we move the 1/2 to ‘where it supposed to be’?” (I loved that one…shrugged and informed them that it IS where it’s supposed to be Thank. You. Very. Much.)

“Do they have to be fraction numbers or can they be ‘real’ numbers?” (Love how fractions are fake numbers…)

So off they went to their teams. I asked them to work for 10 minutes or so with their team and to come up with ONE united solution. They put their heads together and I sat back and listened to all sorts of amazing discussions. There was lots of pencil tapping, fingers used as “spacing guides”, and even a few rulers pulled out to try to prove points! 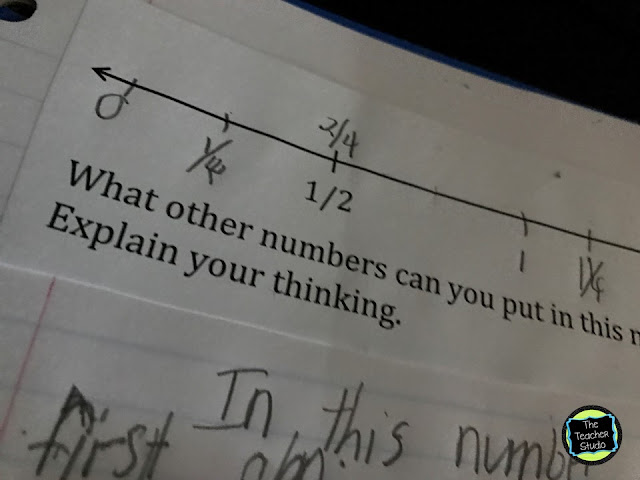 After they had worked, I had all of the groups come up to the Smartboard and share their ideas . . . 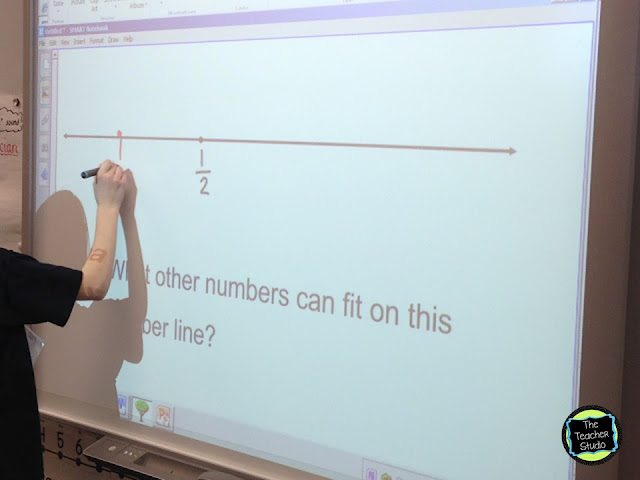 We talked about how similar and different the different solutions were. I was surprised at how uniform they were, to be honest. Pretty much all groups plopped a “0” and a “1” on either side of the 1/2–with the 0 being as far to the left as they could go. Different groups then did varying degrees of division . . . some counted 0, 1/4, 1/2, 3/4, and so on. Others put in eighths and a few added “estimated” fractions like 1/3. But every single group put the zero “as far over as they could”. They were all very insistent that there be EQUAL spacing between the 0, the 1/2, and their 1. Most groups also had room to add the 1 1/2. I was intrigued.

I was still surprised that no one really thought out of the box, so I asked if they wanted to see MY solution. They couldn’t believe it because, of course, I NEVER show them how I would do it! You could just tell they were thinking, “What is she DOING?” Always keep them on their toes, that’s what I always say. Because I was at the Smartboard, I have no photos, so here is my recreation of my first attempt: 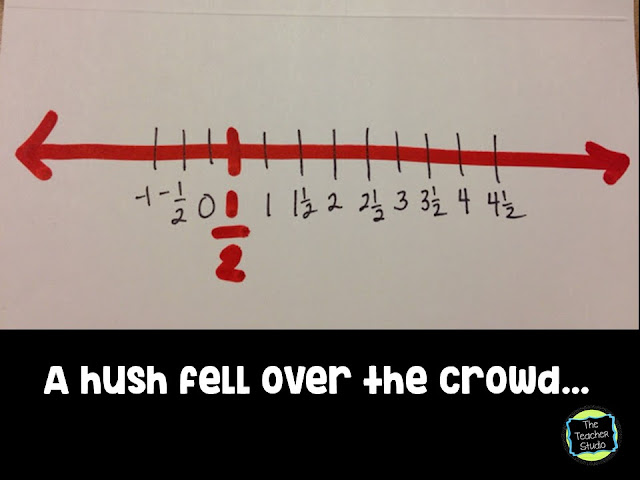 I threw this bad boy up there and the students were silent. Someone finally chimed in and said, “You didn’t fill up the line.” Someone else said, “Why didn’t you put the zero at the end?” I spoke nary a word. I waited. The kids complained. They talked. Finally I heard,

“Wait, guys. The number line has arrows on the end. It goes on forever in both directions. There isn’t an end.”

Are these not your favorite moments? Those unplanned, unscripted, “I don’t know where this is going and it’s a little scary for me as a teacher” moments? That comment was the catalyst for the next part of the discussion where we talked about spacing on a number line, equal parts, and so on. Not being able to leave well enough alone, I then threw this one out there: 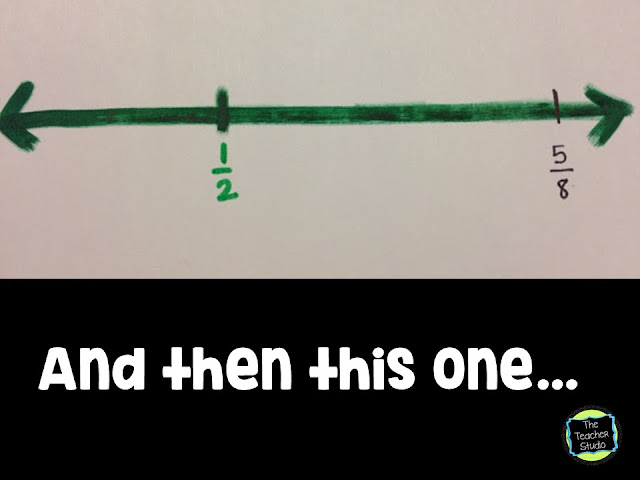 Now this one really irritated them.

Again, I shrug. I sent them back to their teams to find other numbers that would work on MY number line. I only gave them a little while to work, but when I started hearing things like . . .

“We need to find other fractions that are equivalent to 1/2.”

I knew we were making progress. So–step outside the box with YOUR little people. Look at things a new way. Give them LESS information and see what they can figure out! The world’s problems aren’t going to be solved by people who can pick from among four bubbles, folks! We must be helping them construct meaning. Stay tuned for tomorrow when I tell you how we tried an example/counterexample warm up. . . and it was so much fun! Thanks for joining me!

This blog post and sequencing activity is now a part of my comprehensive fraction unit available by clicking the image below. Hundreds of teachers have now used it to change the way they teach fractions! 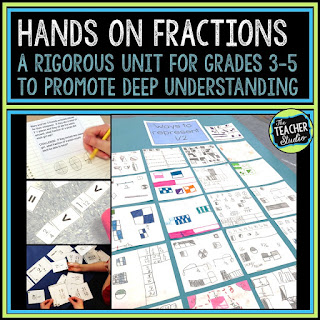 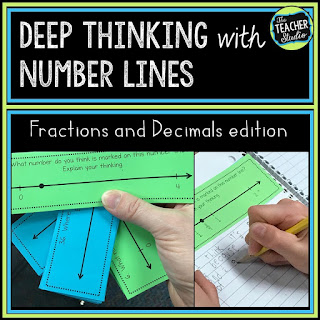 How about the unit, the number line work AND eight other fraction resources? 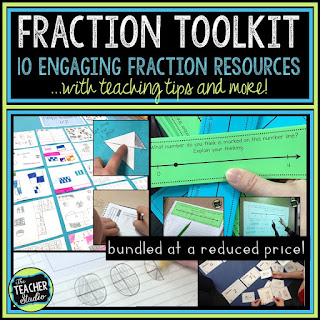