It is getting close to the end of our fractions unit . . . and I am trying to reflect on what more I need to accomplish!  I am really seeing students (for the most part) having an “ease” with fractions, with equivalence, and with some of the “big picture” ideas.  I know I want to dig into some problem solving with addition, subtraction, multiplication, and division, and I want to throw some more “traditional” exit slips at them to see how well they do on more computation-based tasks as well.

Today I asked the students to solve some quick equivalency problems (3/4 = ? /16) and so on.  17 of my students aced it, 3 of them missed one (fact mistakes . . . AYE!  So many fact mistakes!!!), and 2 of them seem to still really not understand the concept.  Tomorrow–I will pull the 2 and go back to some paper folding to try to connect to the computation and see where they are missing the boat.

So . . .  today!  What did we do?  I flashed the following direction on the Smartboard: 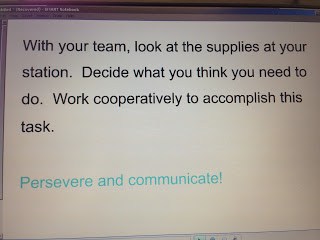 I split the students into four color groups (based on the color of their chart paper–totally randomly handed out colored chips to assign groups).  Each piece of chart paper had a stack of papers on it. 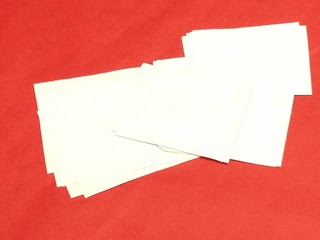 I told the students to move to their station and to get to work.  They looked at me with puzzled looks.  No one said a word, but their little faces said, “LADY–you are LOSING it.  What do you want us to DO?”
I smiled and shrugged.  I told them true problem solvers would just dig in.
And so they did. 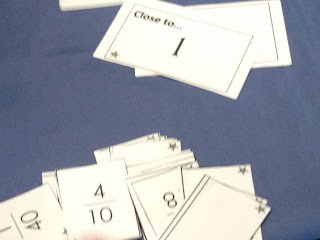 This activity is one of the ones I have in my Hands On Fractions set . . . and I will include it as a part of my fraction unit based on these blog posts.  You could most certainly create this yourself!  What the students found at their station:
–a set of cards labeled “Close to 0”, “Close to 1/2”, “Close to 1” and so on
–a set of fraction cards
–6 blank “my fraction” cards
Immediately, the students started sorting and organizing.  As always, I loved sitting back and eavesdropping and spying.  It was delightful to see that I now have VERY few students who just sit back and need encouragement to jump in.  Our hard work at getting everyone involved and feeling safe has paid off!  These were big groups–5 or 6 students–so they really needed to listen to each other.  For the first 10 minutes, all I did was observe.
All groups worked to organize their “close to” cards first. . .
As the teams began to sort their cards into the correct area, I noticed a pattern with their cooperation.  Each team seemed to be functioning well and work was being done.  HOWEVER . . . looking closely, I realized that really each team was functioning like 5 individuals sitting next to each other.  It was like parallel play–for math!  Each student was taking a card and announcing its correct placement and then grabbing for another card–no discussion, no questioning.
I decided it was time to intervene; the whole point of this activity was to really discuss why each fraction belonged where it did–these were not all easy answers!  I asked the students to stop their work and explained to them what I noticed.  I asked them to take a few minutes to talk with their team about how they could improve their teamwork, and then we shared ideas.  I sent them back to work and saw MUCH better work! 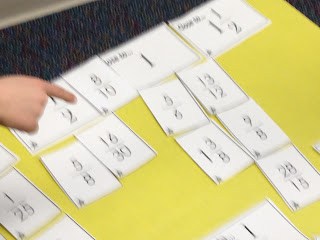 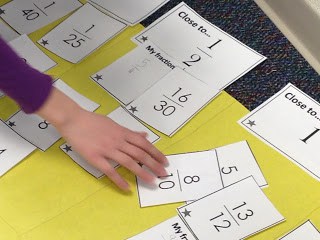 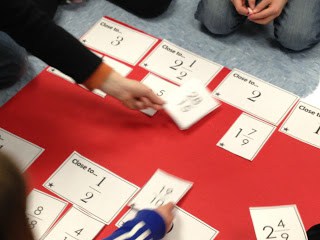 I saw students pointing.  I heard students debating.  I heard really cool stuff that we have been working on for the last few weeks!  Things like . . .
“It HAS to be larger than one because the numerator is larger than the denominator!”
and
“It is closer to 1/2 because 16/30 is only one thirtieth away from 15/30 which is equivalent to 1/2.  That’s way closer than to one whole.”
and
“4/9 is really less than half because 1/2 of nine would be four and a half.  This one only has 4 ninths–so it is less than half.”
Pretty neat, eh?
So after they had worked for quite a while, I noticed some teams breaking out the “my fraction” cards and making their own.  Can you believe–not a single student asked me for a single direction all day? 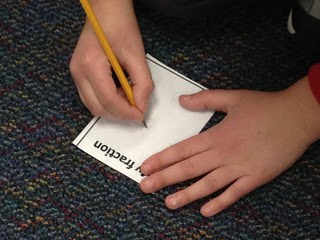 I was so glad that I put these in the lesson. . .  it was a great way to differentiate (not all groups got 6 of them made) and I could see how some students worked to try to get one in each category and so on.  When I felt it was time to move on, I had the students rotate from group to group and study their work.  Rules?  Critique but do not touch.  Be ready to share. 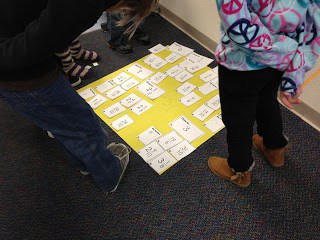 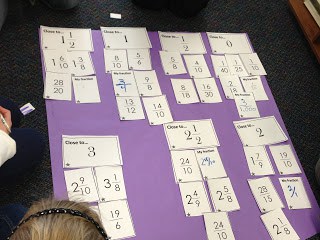 And it should be no real shock to you that my students quickly picked out the ones they saw that were different from what they had done.  I sat back and listened to the really nifty discussions and “proofs” they were using.
When they had seen all 4 groups, I flashed photos on the Smartboard from each group and we talked about “issues” we had seen.  Students from different groups defended their answers, explained that they thought they were right but when they saw other groups with different answers, they thought more and now wanted to change their answers, and then we had a few we had to tackle more in depth. 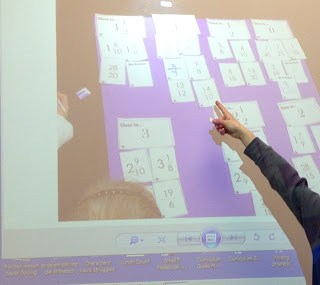 This student wasn’t pleased that the 14/10 was in the “close to 1” instead of “close to 1 1/2”.  He did a great job explaining that the extra 4/10 was only 1/10 away from 5/10.  The purple group agreed and said they would move it.  Another student commented on the fact that a few posters had the groups kind of blending together and that it was hard to tell which fraction went with what.  She then smugly added, “That’s why OUR group drew lines on our paper to show that.”  I acknowledged how important it is to organize work and work precisely–but also let them students know that I had cut the paper and it was a tight fit!  When we were finished, I sent the groups back to make any last minute changes and to glue down their work.
So . . . all in all, I think it was a valuable experience.  Tomorrow I am giving an “entrance” slip asking students to write down three fractions that are close to 1/2, close to 1, and close to 1 1/2.  We’ll see how they do!
I hope you found this interesting–and maybe will give it a try!  For those of you who are following along and are interested in this unit, please let me know what you would like included.  Here is what I am thinking:
–The actual blog post (maybe reworded a bit) with clear learning targets as tied to the Common Core
–Any journal prompts ready to be printed, cut, and glued into math notebooks
–Direction cards for tasks (if used)
–The fraction number cards or other things actually USED for the investigation (even if they are already included in fraction sequencing set I sell . . .)
–Exit slips to match some of the learning targets
What else would you like?  Thanks so much for your support. . .  you don’t know how your kind words have been “filling my bucket” over the last weeks!