Top
Hello!  I don’t know about you–but I can’t lie.  I am excited to have a four day week and a week off next week!  I know not everyone has the same break schedule (or even breaks!) so I promise to  not rub in that not only am I off next week, but that I am going to be on a small land mass totally surrounded by water!  I have a few blog posts that I hope to write this week, but don’t abandon me when you don’t see as many posts, ok?
Today I wanted to let you know about a unit we are doing in reading and writing–and for those of you who use “Lucy”, this may feel a little familiar.  We are writing and studying literary essays through “close reading” of familiar texts.  We are going to write an essay as a class on Tiger Rising–our beloved read aloud from earlier this year, group essays based on Flutter when we finish, and then students are going to self-select books they have read to go back and dig deeper into to write a succinct but important literary essay.  Here’s what we have covered so far: 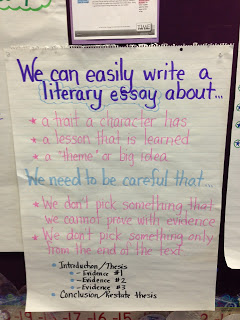 We reviewed the language we used earlier this year with our opinion essays . . . 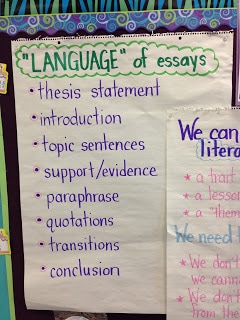 We started working in pairs and trios to go back and dig deeper into Tiger Rising.  This has NOT been easy!  We have been wrestling with what to look for! 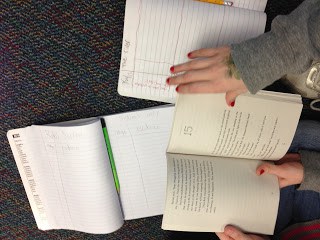 What I realized after presenting the idea that a literary essay can be based on a character, a theme, a lesson, and so on was that I needed to REALLY scaffold this–I gave them too much information.  So I  made a decision–we were going to write about a character. (Yes, I know this is the easiest type of essay to write, but this is all really new for my students.  I am hoping they branch out more for the next few essays!) 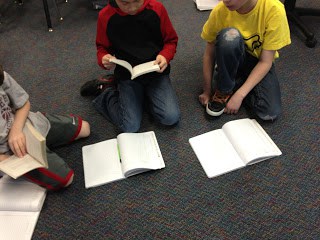 I thought this would be easier!  I sent the students off to dig for ideas about the two main characters, Rob and Sistine.  I said I wanted them to be able to fill in the blank:
Rob is a very ___________ character.  Sistine is a very ____________ character.  I thought we could then decide together which character and trait led to the strongest “reaction” from the class.  I sent them off to study and hunt and to be ready to share.  Oh . . .  and share we did. 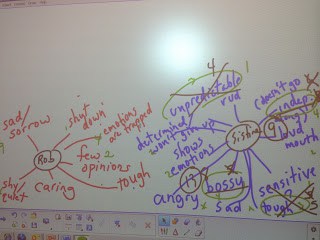 Seriously!  Look at the amazing stuff they came up with!  I thought, “How I am ever going to help them narrow this down?”  So I asked them to meet with their study teams (the 2 or 3 students working together for this unit) and to really try to defend their thinking.  We agreed that all of them were true–but we were on a hunt for the ones that really stuck out.  After a while, I called them back and we voted.
Rob was easy–the fact that Rob was a sad character (although we REALLY like the word “sorrow” and felt it captured him more), but Sistine was another story!  We could not get agreement at all!
I’m not sure if you can see the numbers–but pretty much everything got a few votes.  We took the top 3 vote getters and I sent the students back to discuss further and to really hunt in the text for clear examples.  I reminded them that we were going to need at least 3 specific examples to use in our essay, so they needed to be thinking about that with their voting.
We came back, voted again–and narrowed it down to two.  It took YET another round of discussions, proof, argument, defense, offense, and pouting (some on my part, by the way!) to decide that:
Sistine is a very bossy character.

I was devastated!  I was so convinced that “independent” was a better choice.  I told the students that I was surprised and a little disappointed that my pick wasn’t selected.  One of them reminded me that “the people have spoken”.

Anyhoo–this led to our next steps . . . because we still hadn’t picked our real thesis–would we write about Rob?  About Sistine?  I sent them away to think about it and told them that the next day we HAD to decide because we had to start writing an introduction.

I was already exhausted and was thinking that perhaps I should have just TOLD them the thesis statement I had in mind all along, but I am going to trust my gut and say the sweat and tears will be worth it in the end.  Cross your fingers–and stick around to see what happens!