These kids have a terrible teacher!
After I shook off the embarrassment and regrouped, I designed my next plan of attack.  I wanted to tackle the misconceptions by presenting students with a variety of problems, each with its own little twist.
First . . . A little warm up on the Smartboard.  The first slide shows the 5 partner questions I revealed one at a time…the other slides we worked through as review (all based on errors I saw on the test.) 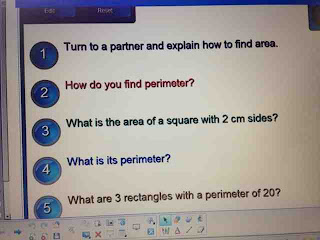 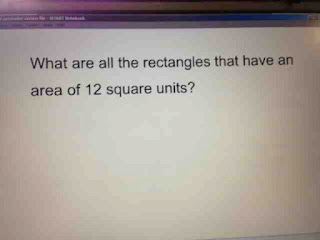 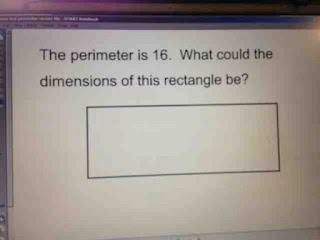 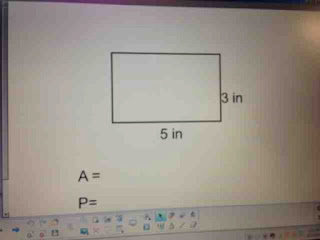 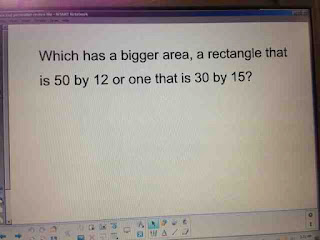 After we had worked on these as a full class, then it was time for me to ask the students to “be the teacher”.  I explained that I wanted them to really study WHAT the students did instead of just what the answer is.  What did this look like? Take a peek.  It’s a terrible photo–so sorry!  The words at the top say,
“A problem on a math test asked students to draw a square with a perimeter of 64 and asked them to find the area.  See how the following three kids did it.  Explain how each child did.” 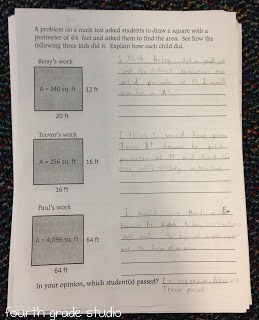 After the students thought, worked, and wrote, I flashed each students’ work up on the Smartboard and we discussed what they did WELL and where they made their errors. 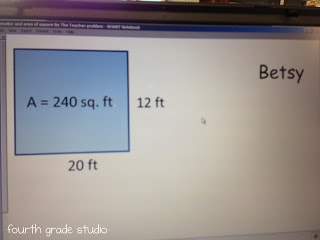 So . . . we studied Betsy’s work and figured out that she did some things really well!  She knew that the perimeter had to be 64 feet–and hers was.  She also knew to multiply the base times height to get the area–and she did that accurately.  What did she miss?  She missed the part of the problem that said she needed to draw a square.  So I ask you as teachers–how did she do?  The students were mixed.
After Betsy, we studied Trevor’s work. 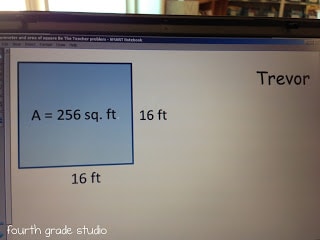 Students were quick to point out the Trevor had things right!  He knew to label all the sides equally, how to make sure the perimeter was 64 feet, and that the area was correct at 256 square feet. Students were unanimous that Trevor passed!
Last up?  Paul. 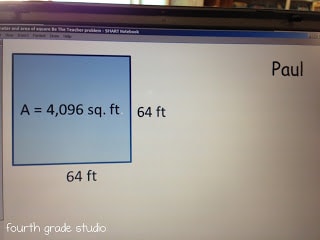 Kids immediately were ready to throw poor Paul under the bus declaring how terribly wrong his answer was.  I stopped them and asked them to tell me what he did WELL.  Students identified that he DID know to make a square with all sides equal and he DID know that you find area by multiplying base time height.  What he did not do well was identify that the perimeter was supposed to be 64 feet, not each side.
So I asked the students, “Who would you pass?”
We had a fabulous discussion!  Everyone agreed that Trevor passed–but there were mixed review on the other two!  I asked the students what they thought was most important–and the kids agreed that an understanding of area and perimeter seemed key.  Once we decided that, a number of kids called out . . . “Then Betsy should pass!”  We discussed a little bit longer, and I told the students that this is what “grading” is all about–making decisions about what students know and don’t know and can and can’t do.  I also explained that showing work really helps teacher decide this (I have had a recent “I can do it in my head.” epidemic.).
Just thought you might like to see how I tackled some of the misconceptions I saw on the test–and try to nip a few other problems in the process!  Hope you had a good Monday!